Some of my favorite conversions are really simple ones that barely even qualify as conversions, but they’re still a little different from the Official Way Of Doing Things.

Last year, I bought a Rapid Insertion Force boxed set that came with 9 Crisis suits, 18 gun drones, and 6 XV25 stealthsuits. A lot of the Crisis suits had some pretty bad molding issues like sinkholes and gaps between parts. Several of them I managed to address by filling them in with Squadron modeling putty or ProCreate sculpting putty and then smoothing/sanding them down, but a few of the molding issues just weren’t as straightforward to fix. I could have returned the boxed set or exchanged it, but I was in the mood for a challenge.

In the case of the jump packs, there was a fitting issue where the pack halves were significantly offset. The solution to that was to make sure both of the shoulder hardpoints were occupied, so I chose a missile pod and the shield generator pieces to occupy those slots. The shield generator is just cosmetic, it isn’t literally meant to be an usable wargear item. It just looks cool, like some sort of advanced sensor system. 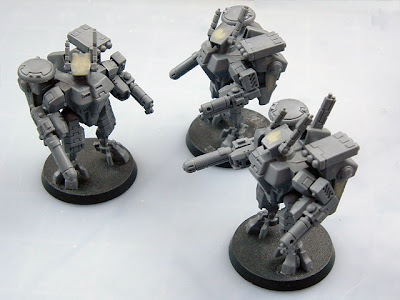 I also cut off the antenna on one of the leftover pieces and glued it to the top center of the pack to represent unit leaders. You can see that mod on the suit at the lower right in the above image. They’re equipped with plasma rifles, missile pods, and flamers because they were intended to be used in my “Tauship Troopers” scenario, and I wanted a loadout reminiscent of the powered suits in the Heinlein novel. The bugs are supposed to be represented by various Tyranids, and I put the project on hold because I was having difficulty finding an affordable way to create a lot of Tyranid Warriors without ranged weapons. I would have had to buy the old Gaunt box set, use the Hormagaunt arms, which would have left me with a lot of useless Hormagaunt/Termagant bodies, and since I don’t like Termagants, I didn’t want a whole bunch of useless bodies sitting around in my bitz box doing nothing. I’m getting off tangent here, so we’ll get back to that in a minute.

The other not-quite-a-conversion thing I like to do is mount the weapons upside down so that their ammo/power supply is facing down, which looks better to me. The unit shown below illustrates that with their fusion blasters. 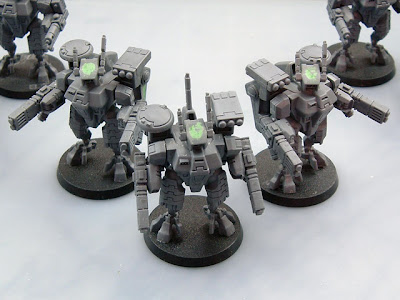 The unit above is supposed to be a vehicle wrecking special team, but I’m seriously considering popping off the fusion blasters and giving them the same plasma rifle/flamer loadout as the other 6 suits. Either that or buying 3 more suits…I haven’t decided yet.
Okay, back to the Tauship Troopers thing. What got me to dust off this project once again is the fact that Games Workshop is going to release separate box sets for Hormagaunts/Termagants in January. Not only that, but they’re releasing plastic Raveners, Gargoyles, and a Trygon too! The Raveners are even better than Warriors because they’re not carrying meatguns, and I can finally buy Hormagaunts without wasting money on Termagants that I don’t want. I need to figure out something for the Gargoyles, though, since they  apparently come with meatguns and no melee weapon options. I might end up just filling in the arm holes or giving them spinefists.