Photoshop CS1 on a 64-bit Windows 7 machine: Buggy, crashy, aggravating.
Photoshop CS5 x64 on a 64-bit Windows 7 machine: Runs like a dream.
Argh. Looks like they’re still gonna get my money in the end.
On the bright side, I don’t need to cough up a whole thousand anymore. Having worked extensively with the CS5 tryout for the past several days, I’ve found that the 3D and animation tools in CS5 Extended pretty much don’t get used at all, because they’re really rudimentary and lacking compared to what can be done in a standalone 3D app, so there’s no sense in paying the extra premium for a half-assed set of features that I’m not gonna use. That means I can get by with just regular old Photoshop CS5.
What brought all that on? Oh, just this. 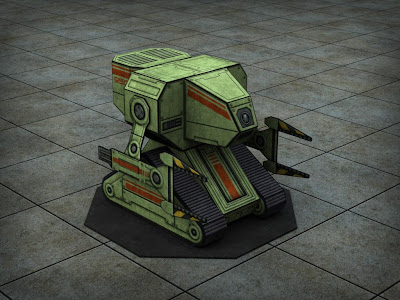 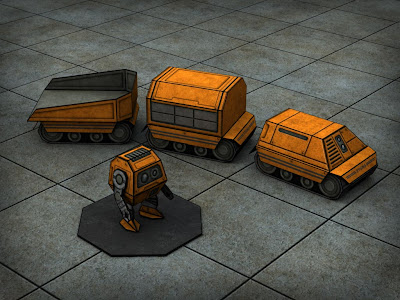 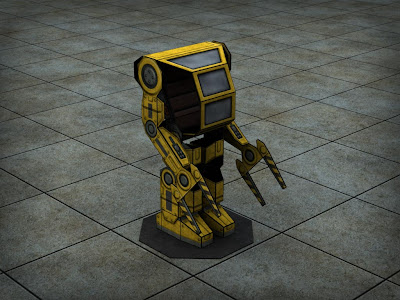 These models have all been re-developed in Ultimate Papercraft 3D, now include machine-cutting files, and have also received a bit of a texture refresh. Nothing major, I just updated the layer styles and colors to use the 2010 styles and swatches.
Currently working on: 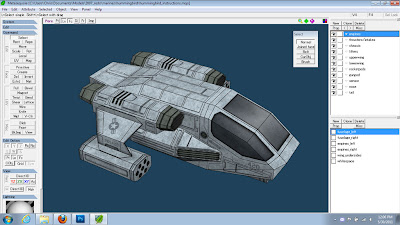 Yes, that’s a Marine haze gray scheme–I found a couple of hidden layer groups with Marine decals, so I enabled them and updated the colors for the fun of it.
I love my new machine. I have antialiasing, anisotropic filtering, and a bunch of other things enabled on the GeForce GT540M for Metasequoia’s graphics profile. That means bigger and prettier screenshots with fewer jaggies and nasties.
Speaking of which, I also found a treasure trove of abandoned models that never made it to release because of technical limitations back in 2007. Even though my dearly departed desktop workstation was capable of handling textures larger than 1024x1024px, I was still using Pepakura Designer to unfold my models, which did NOT support larger textures. So, larger models required workarounds or design compromises, which frequently didn’t really work out and resulted in models being abandoned and forgotten. Here are some of those lost models, which were supposed to go with the Hummingbird and the battlesuited Marines in 2007: 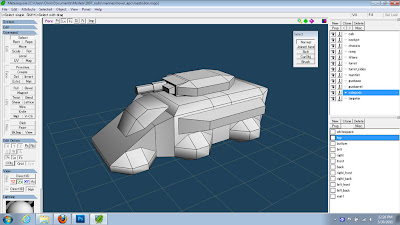 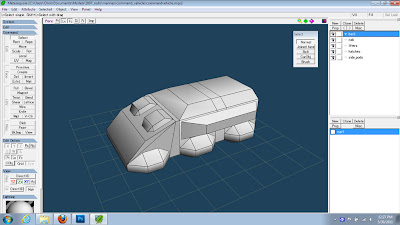 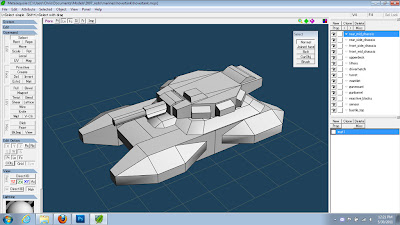 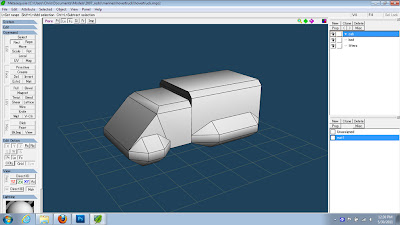 You can kind of see how they’re related to the Hummingbird visually, as they all have prominent countergrav pods on the sides, which all resemble each other a bit as a visually unifying hook.
Since I wasn’t able to do all of those models at the time, a couple of more manageable models also got axed because there just wasn’t a line left after cutting all the other models out of it: 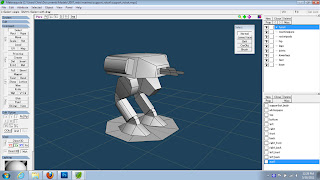 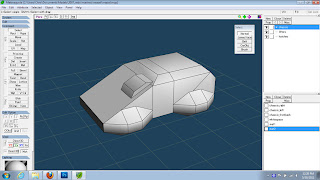 Now, all of those models also had civilian counterparts. Those civilian counterparts predated the military models by a couple of years, and were supposed to be my half of a collaborative project with Denny Unger before it got scrapped. There are already entirely too many images in this post, so I’m just gonna pick one of them, the Veloce Brio: 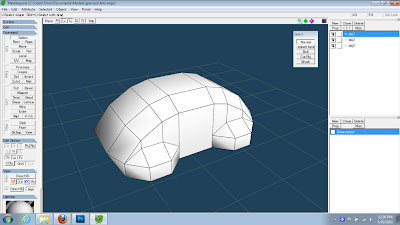 Denny textured a slightly older variant of that to look like a yellow space Volkswagen as a test. No photos of the prototype survived, but it was a really cute little thing, and at one point, Matt Lyon demanded that we slap an Autobot insignia on it. The project was shelved in favor of Wormhole shortly after that first test model.
Normally, that’d have been all she wrote, but Denny fished it off his hard drive recently and passed it along to Paul Senior, who re-skinned it, and now it’s part of Paul’s upcoming Streets of Titan release: 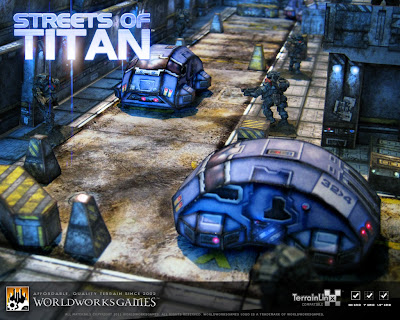 It was really nice to see the Veloce Brio again after all those years.

Not all of our collaborative works were abject failures, though–I also did the geometry for the original Lair of the Dragon God 2.5D dragon as a commission job for Denny. He added the frills, horns, and some additional detailing, and knocked the ball out of the park with the texturing. Things sort of came full circle again earlier this year–when the Dragon God set was converted to TerrainLinX format, yours truly was also responsible for the additional dragon color variations. My favorites are the green/yellow and black/red ones.

We finally got a start on the second phase of re-organizing my office yesterday. We hauled several hundred pounds of unused shipping boxes and materials to the recyclers, and I recovered just under half of the floor space in my office, and we also donated the huge laser printer to the Salvation Army. I also moved the furniture around a bit so I could make more efficient use of the freed-up floor space, and re-adjusted the shelves on my workstation desk so I could move the laptop back to a more comfortable position.

Today, I spent some time de-cluttering the various tables and putting everything into its new home. As part of that process, I had to pack up all of the business paperwork, printed sales records, the Supply Depot shipping scale, and a bunch of other things. I didn’t think that a sense of awful finality would hit me as hard as it did, and in some strange way, I felt a bit like I was finally laying an old friend to rest after a long terminal illness. I’d pick up some item, and it would remind me of something, and I’d either chuckle or feel a little bit sad. I guess it’s something I was able to push aside in the interest of moving on and taking decisive action, so I never really gave myself the time or the luxury of thinking too hard about it until now.

I also transitioned a lot of stuff over to the new notebook and set up the other hardware to work with it, and I’m composing this post on the new machine. The keyboard is gonna take some getting used to–the spacing and positioning is different enough from my old Gateway convertible that I have to pay extra attention to spelling.

I also found some more stuff that needs to go to a good home. First come, first serve.

I finally have my papercraft and photo tables back. I also have room for a Detolf display case next to my work desk, and the whole top shelf for models. I should be able to hit the ground running whenever I get back into making new models.

1. Harold Camping is full of bologna, as I predicted.

2. It’s been 6 weeks and 1 day since I quit smoking. Yay, me.
3. I’m looking for a Mac. I need a work hoopty for a cross-platform desktop application project in the near future, so I don’t need anything fancy or top of the line. At the moment, I have my eye on a Mac Mini. Comments, suggestions, and so forth from resident Mac users are welcome.
Amazon gave me a full refund for that bootleg copy of Photoshop CS5 Extended that I returned. So, that part of it is over, at least. Adobe support, on the other hand, was not as pleasant to deal with. I’m glad Amazon made things right instead of leaving me to deal with Adobe.
I don’t think I’ll be buying any more Adobe products. No, don’t get me wrong–I’m not mad at them for not being helpful or anything like that, it’s more a matter of seeing how they routinely deal with support issues. My experience with them was an eye-opening taster of what I could look forward to if I had a problem with their products at some point in the future, and I didn’t really like what I saw.
If I’m going to shell out $1000 on a program, I’d kind of like to not have to spend hours on the phone repeatedly and patiently explaining to some thick-accented dude named Rajneesh what my boggle is, or waiting 5 days between web support case updates. No thanks, my time is money too, and if I’m going to pay that much money for software, I’m gonna expect timely and efficient support if I happen to need it. Naive and wishy-washy? Maybe, but you have to draw the line somewhere.
So, I’ve installed my trusty old copy of Photoshop CS on the new notebook. I’ve used it for 5 years without any complaints, and I can certainly use it for a while longer.

As a consequence of those issues, they took 30 hours of content offline in the process of rolling back to an earlier stable version, so some of my recent posts and their comments disappeared. Those issues seem to have been resolved now. I nearly went into withdrawal.

Edit: No, they’re not resolved yet. Comments are still missing, and the timestamps were off. Guess they’re still working on things.