First, I want to apologize for being so scarce. I normally don’t have any trouble keeping up with all the various forums and whatnot, but I’ve been extremely busy as of late. Some highlights:

The Ebbles download area got borked a while back due to some settings changes made by my hosting provider. These changes are normally a good thing, but they ended up affecting a couple of scripts that deliver the downloads. After some lengthy back and forth with technical support, we finally found the cause and have fixed most of the problems. However, there may still be a couple of missing files, and I still need to add the old free downloads to the system and merge the Ecwid store’s downloads with the old ones.

Incidentally, I had already set up and planned to surprise all of my old customers with full access to all of my old products, but the technical issues forced me to put the official announcement on hold until they were resolved. I noticed, however, a tendency for many of those customers to obviously discover that they suddenly had a lot of downloads they hadn’t actually paid for, then instead of emailing me on the off chance that it might have been a mistake, most of these people just tried to binge-download it all in a single go and run off like common looters. How rude.

On the WWG front, some of you likely know about that little whoopsie where some people are missing downloads. Long story short, the process of migrating data from the old WWG store to the new WWG store relied upon the product SKU to match up products and generate downloads. However, the SKUs for some of the products changed at some point, so these products were erroneously handled as discontinued legacy products. Those show up in your order history, but not in your collections.

To make things even more hilarious, we did not realize this had occurred until well after the store had gone live and a lot of new orders had been processed. So, we couldn’t just wipe the slate clean and redo the migration, and it meant I had to do the programming equivalent of repairing an engine while it’s still running. It took me a while, but I’ve developed and tested a fix for that issue. As it requires turning the store off for maintenance for a little while, I’m scheduling it to happen during off-peak hours during an upcoming weekend.

I’ve also been minding the store in Denny’s absence. The guy finally caught some vacation time this past weekend through Wednesday, and I hope he made the most of it. I’ve been keeping an eye on the dev forum, the public forum, the store backend, and making sure the scheduled releases went smoothly. Speaking of which, Matt’s done a bang-up job on the new Mayhem Traffic set, so check it out!

I’ve also been moonlighting in graphic design. Mrs E works for a local school for certified nurse aides, and she’s the senior CNA instructor there. She asked me to update their advertising flyer, because the old one was pretty dire. Apparently I’ve still got the touch for that sort of thing, because they’re in love with it and have kicked the mockup I did to the home office in Florida for approval. She also kind of broached the idea of me redoing their website and some other stuff…which ended in me nearly asphyxiating from laughter, then curling up into the fetal position and doing a 4 hour Colonel Kurtz impression under the dining room table.

And just to make sure there’s no rest for the wicked, Mrs E’s computer has bought a bus ticket to Failville as of a couple days ago. I’m currently copying her files to my old Gateway convertible, which is why I’m still up at 2:53AM CST instead of sleeping. I spent the day cleaning my old stuff off of it, then running a system recovery, uninstalling the factory-supplied shovelware, installing Firefox, Thunderbird, and a bunch of other stuff, and now I’m moving her documents, photos, and assorted files. I figured I’d take the opportunity to update my blog while the file transfer is in process. You know, instead of twiddling my thumbs or counting the popcorn thingies on the ceiling.

I’m gonna go put on a pot of coffee.

(Recap: A while back, I challenged myself to create a complete paper building in 24 hours or less, while following some pretty strict rules. I succeeded, it was well-received, and I put it on my release workbench. You can read the original post here.)

I’ve been spending time getting the Podtel ready for the next release slot in August. In particular, I spent an unusually long time bouncing around box art renders with the rest of the WWG team, and after several rounds of feedback and ideas, this is what we ended up with: 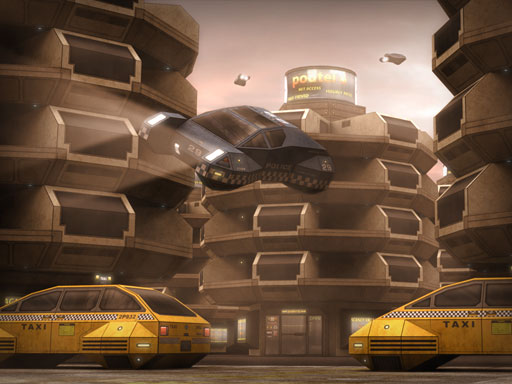 You’ll be able to admire the full-size version once it’s released. I had a lot of fun just playing around with the base render in Photoshop, adding the various lighting and haze effects, and the guys at WWG are a ton of fun to throw this stuff around with. It’s a good environment for me.

I’ve implemented a lot of the ideas brought up in the original post’s comments and in the WWG dev environment. Here are the highlights:

Some of my favorite details:

The Podtel is tentatively scheduled for an August 15 release, alongside the HL 300 taxicab. I will also be releasing a few more old Ebbles sets that I had the opportunity to complete a while back–the Itoyo 950, the Handyman 350, and the Robot Repair Team. (Yes, with machine-cutting support!)