I’ve been getting a *lot* of requests for custom schemes for the Interceptor. Unfortunately for most of the folks requesting extra schemes, I’m not gonna spend the rest of my life doing every single police scheme in the entire world for $2.50. Fortunately for these folks, though, I did make it easier for them to do their own schemes. 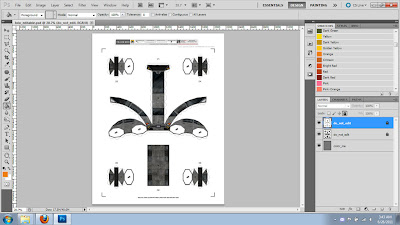 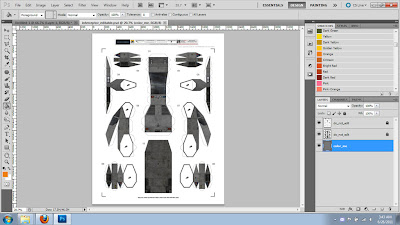 It wasn’t easy, but I managed to figure out how to do editable versions of the Brio and Interceptor that supported a lowest-common-denominator subset of the Photoshop file format that any paint package capable of reading PSD files should handle fine. That means you can open them in free paint apps like the GIMP, or inexpensive paint apps like Photoshop Elements or Paint Shop Pro.

As long as you don’t touch the topmost two layers in the PSDs (page frame and texture), you can color all you want or paste logos and stuff into the layers below them. The results won’t be exactly the same as if I did it myself because my normal layer setup is a lot more complex than that, but it’ll come reasonably close-ish, and you won’t have to extract anything from PDFs or do anything more complicated than flood filling or using brush tools.

Matt Lyon suggested a Hong Kong Police Force variant of the Battenburg livery, and I threw in a Swedish variant while I was at it. 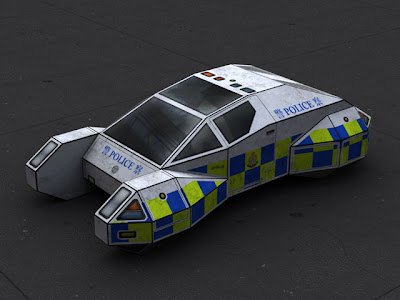 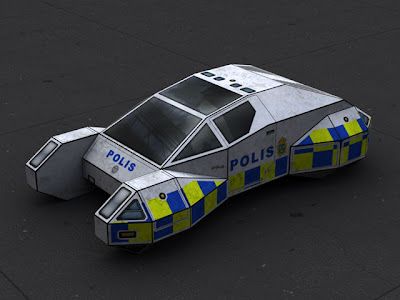 Getting it ready for final review. I took some time to put together a few images for you guys.

Things of note: there are 8 different unit numbers for the classic and sci-fi blue versions, which each have their own PDF. The European PDF includes the UK version plus 5 versions of the blue-over-silver with police markings in different languages.

The third PDF includes the 4 unmarked schemes. I included a dingy white and a hideous beige for unmarked/retired police vehicles, while the silver is an unmarked detective car, and the black is supposed to be useful for FBI and government types. The unmarked versions don’t have the same set of lighting hardware as the marked versions–the areas where the light set is normally installed have been covered up with plug-in panels, and a wigwag headlight/running light setup is used instead. The fleet shop can convert Interceptors from one version to another by popping off the plug-in panels and installing the necessary hardware or vice versa. They don’t fool anyone any more than an unmarked Crown Victoria does, either.

Here are some shots of the model frame and instructions: 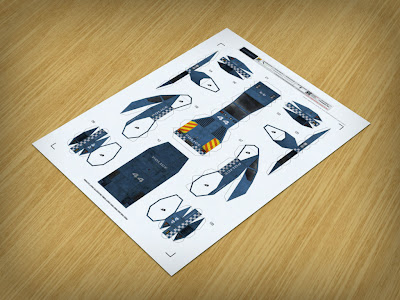 I’m pleased that it stayed within the 1 page/10 parts budget–I was a little worried because of the unusual geometry. 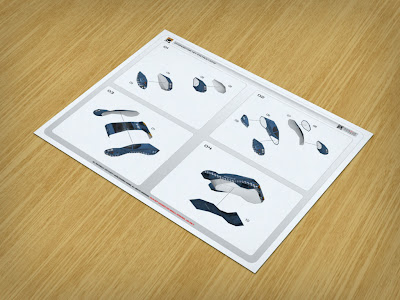 I still have to do a couple more things, but it’ll be ready to zip up and turn in for final review at WWG before I go to bed.

I figured out how to abuse the data-driven graphics feature of Photoshop CS5 even further so I could use it to spool out cars with unique shop numbers and roof numbers. This time, more pictures and less boring text.

First, I set up the texture PSD file of the classic Interceptor scheme as a template. This involves just creating variables and assigning them to layers. 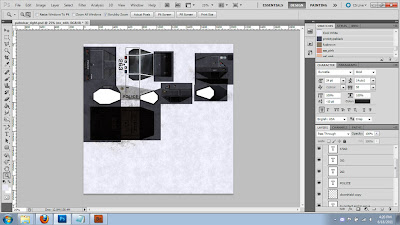 The next thing I did was set up a comma delimited text file to use as the data set source, in good old Notepad: 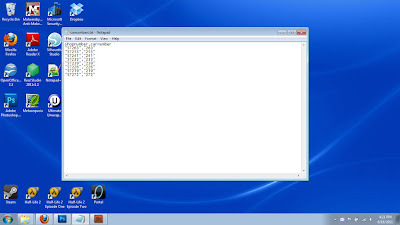 Once both of those things are set up, a few button clicks in Photoshop will change the text layer strings and save each change out as a separate file: 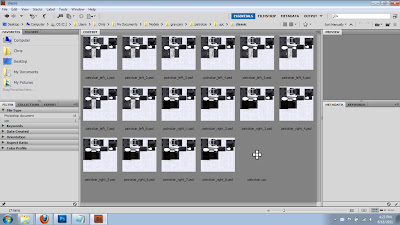 A bit of duplicating and re-merging in Ultimate Papercraft 3D gives me an 8-up layout, and all of the materials have been reassigned to the new texture variants: 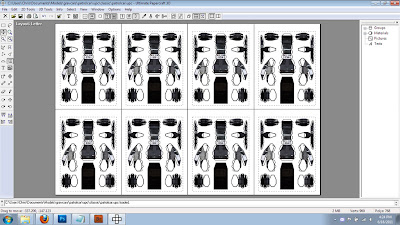 I also spent a few minutes tweaking a copy of the OpenOffice layout template to work with the 8-up version: 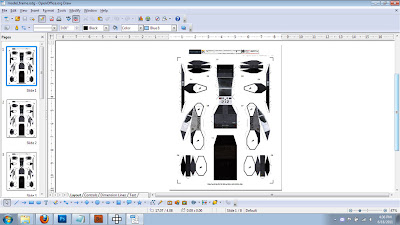 Okay, all of that is just a one-time setup thing. I literally only have to do that once. From this point on, I can simply copy the Ultimate Papercraft 3D and OpenOffice 8-up templates to another folder, and after assigning variables to any other scheme, I can painlessly export a different 8-up without tediously editing a lot of layers and saving things out by hand.

The only real limit on how many variations I can include in a single PDF is completely dependent on the amount of video RAM and system RAM on my machine, and the amount of work needed to set up the unique variations is much less than it used to be when I had to do them all individually by hand. Nice. I definitely could get used to this feature.Note: Don’t worry about how odd the texturing looks. The model is currently wearing a baked global illumination lightmap, which is the source of all the shading, and that lightmap is only used to make the Metasequoia work-in-progress screenshots look a bit nicer. I usually crank the lightmap opacity almost all the way down when exporting paper models for real, so the PDF won’t be anywhere nearly that harshly shaded.

You know what I do on my days off? I work some more. Okay, no, not literally, but I do kind of tend to play around with work-related stuff.

I just discovered something awesome about Photoshop CS5 a couple hours ago when snuffling around in the help files like a truffle pig: data driven graphics. At first, I was a bit puzzled because that really doesn’t sound like a very artsy kind of thing, but it piqued my inner programmer’s curiosity. Turns out that you can basically turn a PSD file into a template, load variables from a text file, and use those variables to do things like change text layers, replace pixels, and hide/show layers.

Of course, I had to give it a try, and after some brief thought, I hit upon the idea of using this functionality to rapidly generate a large number of unique license plates for the Brio, Interceptor, and other vehicles. So, I saved out copies of the Interceptor textures, then cropped them down to just the license plate frames, deleted all superfluous layers, and turned them into license plate templates.

I set them up so I could change the country code and plate text layers on the UK and European plates, and the North American test plates had 4 configurable layers (month of registration, last 2 digits of registration year, serial, and locality). No real reason, I just wanted to see if I could do it.

With the artistic half completed, it was time for the programming bit. I didn’t want to waste my time manually entering license plate data over and over when I could just randomly generate a large amount of data and dump it to a text file that could be loaded in Photoshop. So, I whipped up a rough PHP script and fired up my local install of EasyPHP.

License plates tend to follow a pretty specific format, so it’s not like you can just generate random strings and be done with it. I wrote the script to take a formatting template as input, so I could specify a formatting template like “111-aaa” (3 random numbers, hyphen, 3 random letters), “AA11 AAAA” (2 random alphanumeric characters, 2 random numbers, space, 4 random alphanumeric characters), and so forth. That was fun to do.

I realized shortly after a few rounds of testing that I could literally do any license plate in the world in mass quantities with relatively little work, and it would pretty much only require a different template and formatting string. So, pretty soon, I’m going to be setting up my very own Department of Motor Vehicles next door to Uppity Robots and Ebbles Variations, where you guys can download sheets of unique stick-on license plates for that little bit of extra flavor.

Speaking of which, just for grits and shiggles: here’s a sheet of 570 (yes, that’s not a typo) unique North American-style license plates that I did as a test: licenseplates_test.zip

That’s just a few minutes of hands-on work! All I did was press a few keys, click a few buttons and all of the grunt work was done by Photoshop, Bridge, and OpenOffice.

I’m gonna be modifying the script a bit to randomize the registration date and locality variables for that little extra touch of uniqueness, and also refactoring the data set generation script so I can quickly modify new copies of it to generate plates for a specific country.

Yeah, this is all a bit silly, but it was fun to do, and I don’t often get to exercise both of my core skills at the same time like this.

UPDATE: Here it is! Department of Motor Vehicles