Initially, I was going to build the missile teams as-is. When I got around to working on them, I was a little ambivalent because with all the other conversions done so far, the standard IG missile launcher just isn’t zorty enough, and not converting them in some fashion would feel like a cop-out. So, I put the missile teams on the back burner until last night.

I was watching Aliens again, and there’s a scene where Hudson is being obnoxious, and the phrase “phased plasma gun” piqued my interest. I immediately went to consult Professor Google on the subject, and after several different search queries, I finally chanced upon some online excerpts and scanned images from the Colonial Marines Technical Manual for something called a M78 PIG. This Plasma Infantry Gun, it turns out, looks exactly like a conventional shoulder-fired missile launcher with a separate power pack. Now that’s something we can do with the leftover bits in the Cadian boxed sets! 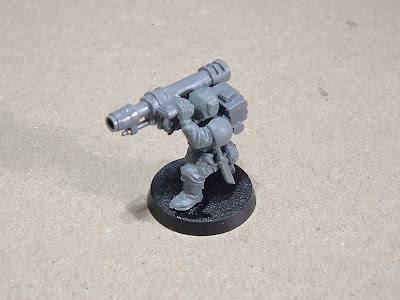 Anatomy of a PIG

According to what I’ve read, the PIG is basically the BFG 9000 of the Aliens setting. When this particular pig oinks, something explodes spectacularly. So, it’s definitely something we want to add to our little arsenal for antimateriel punch.

I decided I wanted to make it look a little bit more like a gun than a missile launcher, while still retaining the overall form factor of a tube-shaped shoulder-fired weapon. Looking through the leftover bitz, I found that the autocannon and lascannon remnants would do a nice job of changing the silhouette of the weapon, and the leftover voxcaster halves from the Sentry Gun conversions would make great power packs with a little work. 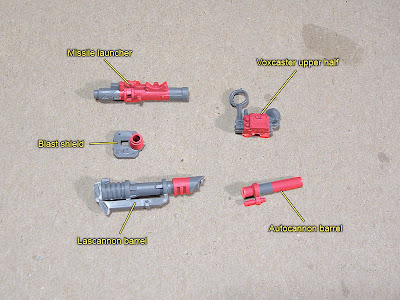 The photos below show how all the parts listed above go together to assemble a PIG. 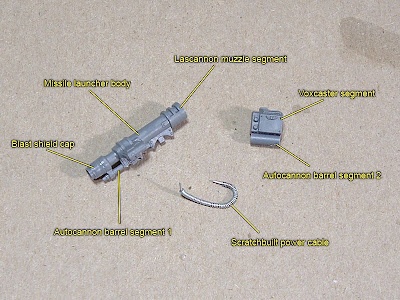 Consult the photos below for clarification on where to drill the holes for the power cable, and how to install it so that it sags nicely: 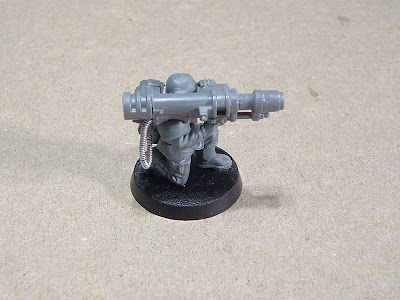 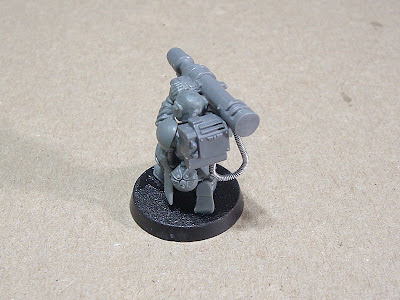 You’re done! Repeat this one more time, and you’ll have a pair of PIGs.

This conversion actually has nothing to do with Aliens, but it uses several leftover bits from the Aliens-themed conversions, and follows the “waste as little as possible” philosophy. We’re going to use up most of the leftover autocannon bits to make a pair of autoloading mortars. 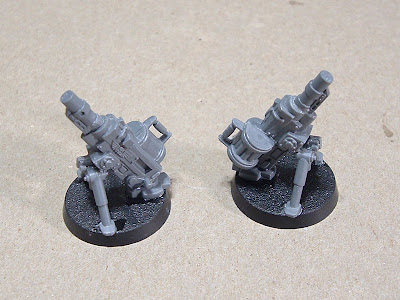 Anatomy of a Thumper

The mortar we’re going to make is called a “Thumper” because that’s the name that immediately popped into my head when I saw the finished product. Because the rear half of an Imperial Guard autocannon (left over from the last few conversions) looks too cool to waste, I decided to see what I could turn it into. Initially, I was simply going to do a snub-nosed autocannon, but because I don’t have anything to mount a snub-nosed autocannon on, that wasn’t an useful option. When I looked at the heavy weapon sprues again, I noticed the mortar parts and everything clicked.

Tube mortars seem so ghetto compared to the conversion work we’ve already done so far, so an autoloading mortar is exactly the kind of thing that goes well with the nature of the other conversions, and it’s also a nice companion to the sentry gun and missile launchers.

The two smartgun conversions use up one and a half of the heavy weapon bipods–one bipod yields two barrels and two waldo attachment points, so the only thing that comes off the second bipod is the cradle that you glue the targeter to. That leaves two usable sets of bipod legs, albeit without the cradle/yoke doohickey on top. Those cut-down bipod legs happen to be exactly the right height for this application. The grenade launcher barrels left over from the sentry gun conversion are also used in this conversion. 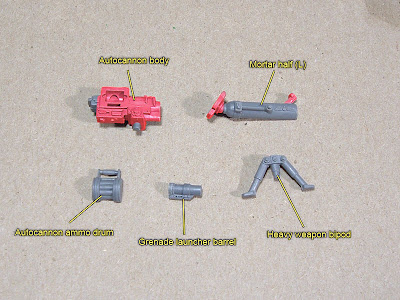 The photos below show how all the parts listed above go together to assemble a Thumper. 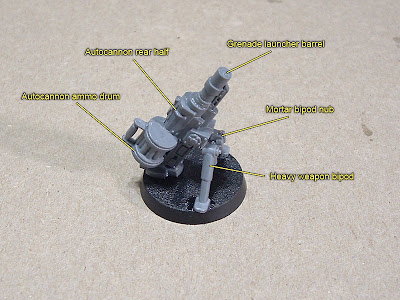 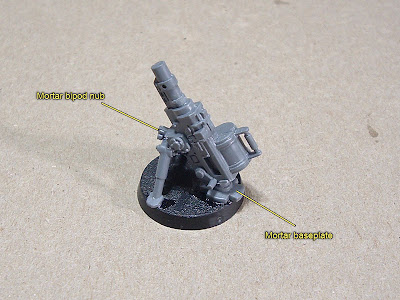 You’re done! Repeat this one more time, and you’ll have a pair of Thumpers.

In the next article, we’ll build a pair of piggy-wiggies.

Another staple of the Aliens film is the flame unit, which is a rifle-sized weapon with an attached fuel canister, so we gotta have at least a couple. This conversion is a slightly modified version of the flamer in Stupid Bitz Tricks #5. At that time, the flamer I found in my bitz box had already been converted to use the muzzle from a Cadian flamer.

This time, we’re keeping the original Space Marine flamer’s muzzle. We’re doing this conversion now because it uses another leftover bit from the Sentry Gun conversion.

Anatomy of a Flame Unit

The Cadian box comes with a delightfully retro-looking flamer that has large backpack fuel tanks and a massive wand, which isn’t quite going to fit in with the rest of the Aliensy stuff we’re doing. So, we’re going for something closer to the movie weapon in look and feel, and we’ll be doing this by shortening and trimming down a standard Space Marine flamer. The Space Marine flamer already has a reasonably close form factor, that being a rifle-sized weapon with an attached fuel canister. 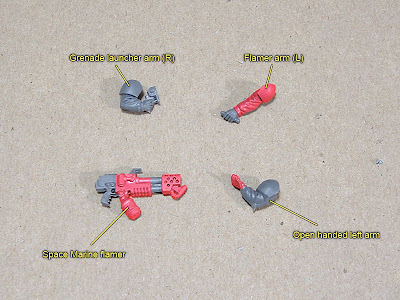 The photos below show how all the parts listed above go together to assemble a flame unit. 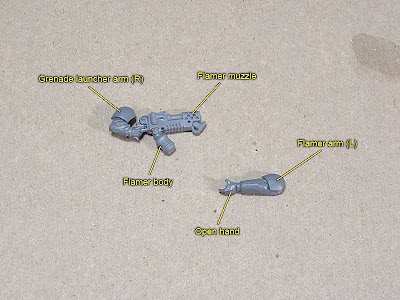 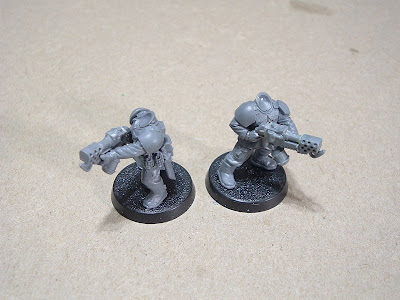 You’re done! Repeat this one more time, and you’ll have a pair of flame units.

In the next article, we’ll make a pair of autoloading mortars.

Another Aliens-themed item is the smart gun, which can be made easily from a couple of heavy weapon bits and a set of flamer arms. This conversion also requires one bit left over from the Sentry Gun conversion.

Incidentally, the original version of this weapon used an Imperial Guard vehicle heavy stubber, but that part makes for an expensive conversion, so I went back to the drawing board to find a way to get the same sort of weapon from cheaper and more common bits.

Anatomy of a Smart Gun

The basic idea behind the smart gun is that it’s a large and somewhat cumbersome machine gun that automatically tracks targets by means of sensors and an actuated harness system, while the actual firing is done by the operator. The significant characteristics of this weapon are, therefore, its size, the auto-tracking capability, a high rate of fire, and the fact that it’s fed by a drum magazine. We are going to incorporate those themes so that while the converted smart gun does not look exactly like the one in the movie, it will still have the correct look and feel. 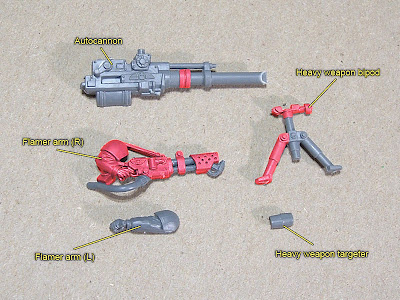 The photos below show how all the parts listed above go together to assemble a smart gun. 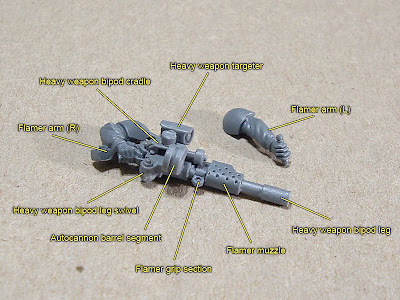 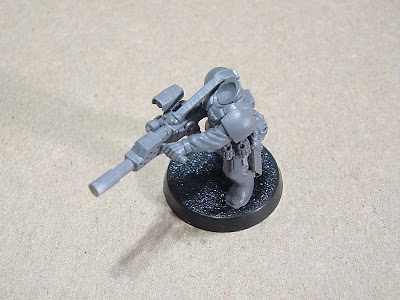 You’re done! Repeat this one more time, and you’ll have a pair of smart guns.

Important note: One heavy weapon bipod yields two smart gun barrels and two waldo attachment points. So, if you do both smart gunners, you’ll actually be using one and a half bipods, not two whole bipods. Use both legs and the bipod cradle of the first bipod, then remove only the bipod cradle from the second bipod. This way, you’ll have two intact bipod leg assemblies to use in the upcoming autoloading mortar conversion.

In the next article, we’re going to make a couple of flame units.

The first conversion we’re going to start with is the sentry gun, because we’ll need some of the leftover bits for later conversions.

Anatomy of a Sentry Gun

In order for a weapon system to convey its autonomous nature, it needs to look the part. So, the sentry gun conversion has 3 major components: the weapon itself, the transceiver module, and the sensor module. The transceiver module is essentially just a box with an antenna on it, and it suggests to the casual observer that the thing is remotely operated. The sensor module contains the imaging, targeting, and fire control systems, and further builds upon the autonomous impression given by the transceiver module. To make it look somewhat portable, there are two carrying handles on top of the sentry gun.

The photo below illustrates the parts needed for this conversion, nearly all of which come from the heavy weapon squad box. When only a small portion of a part is required, the important piece is highlighted in red. (Save the leftover pieces! They’ll come in handy later.) 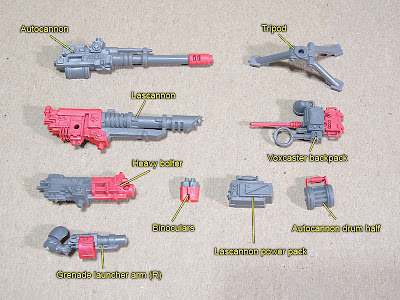 The photos below show how all the parts listed above go together to assemble a sentry gun. 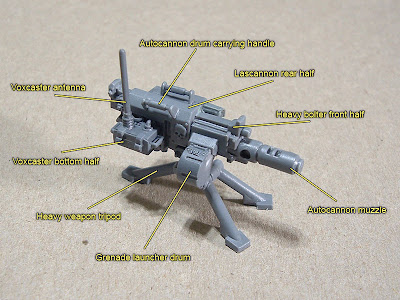 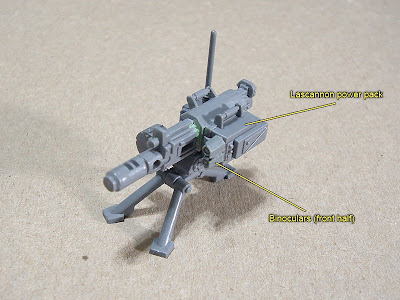 You’re done! Repeat this 2 more times, and you’ll have a full set of 3 sentry guns.

In the next article, we’ll build some smart guns.